Where Have You Gone...

No I haven't forgotten my friends in the blogosphere. I've just been running amuck in the real world. Heather would say that it was the reason I'm further ahead on MS3. She might be right but it wasn't on purpose. See she and Laurie tried to get me to sign up and I knew they already had by the time I did at the 11th hour. So I thought I'd be WAY behind. From the pic of our progress, you can see I was mistaken. 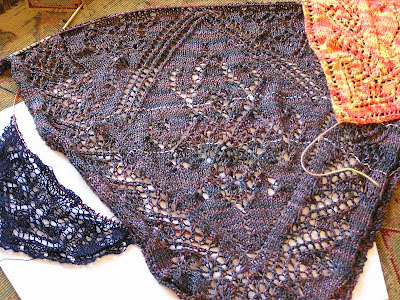 Laurie's is the lovely lacey navy on the left. Heather's is the bright and sunny piece on the right. And mine is the plumy perfection (for me anyway) in the middle. I'm just about to start Clue 3. Special thanks to Heather for the shot as I've been lax about taking a picture since I couldn't do the yarn justice with the camera phone. This pic was taken at Knit One, while the three of us shopped in honor of Laurie's Bday. She turned 29 (with some experience) on Friday. I still find it fascinating how the same pattern can be played out so differently to reflect each person. Laurie's has the classic perfect dressy piece feel. Heather's reminds me of warm summer days and yummy nectarines waiting to wrap around you. Mine reflects the punk/Goth side coming out in something I can wear around less "adventursome" folk. :) So different, so same, all BEAUTIFUL.

Friday we also joined the mob at B&N for the Harry Potter release. I took both Celtings and they had a blast. Elder Celting won some Bertie Bott's Every Flavor Beans and Younger Celting won some make your own charm kit. Both were thrilled. Neither has read it yet but I finished it on Sunday night. Satisfying even if the epilogue is a little cheesy.

In other knitting news, I'll be at Borders on Friday nite as this is where we moved to. I missed the initial move due to Family Weekend. I'll be bringing one of the baby sweaters I'm working on. A faux fairisle self striper based off the Pea Pod sweater construction.
Posted by Celtic Queen at 7:19 PM No comments:

But EVERYONE's Doing It... 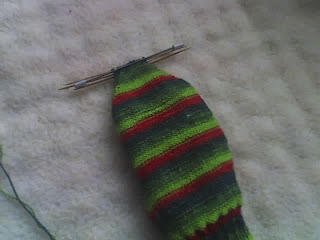 So first off, I want to share my Sock in Socks. I finished on Wednesday but have not had the opportunity to post. I wore them to work yesterday with my crocs and loved how the colors peeped through the holes. I felt so accomplished when I pulled them apart after grafting the toes. So how did I do that? Well first I knit my usual toes and then seperated the stitches for inside and outside sock with 4 dpns(2 inside, 2outside). I then grafted the inside sock first but left the weaving in of the end until after. 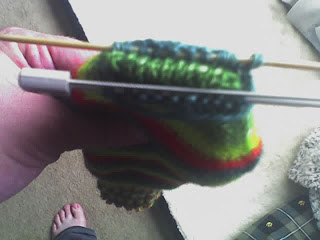 Then grafted the outside sock. This was trickier as I was grafting from the opposite side of the fabric than I was used to, but I did it. I wove in the end and then did a magic trick of pulling a sock out of a sock. 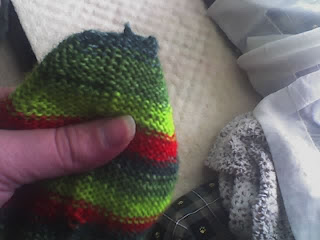 Finally I wove in the last end and VOILA! A beautiful pair of socks. I think I'll do this technique again but we'll see how much I like it when the colors are not so wonderfully striped. 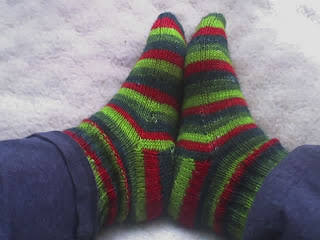 Things I learned from this:

So what now? I'm working on one of my required baby sweaters but I've succumbed to the siren call of Mystery Stole 3. It was hard but I held out against Laurie and Heather signing up and trying to get me to as well. I even held out agains Yarn Harlot's post about it. But then I started reading more and more. And then the deadline was happening in mere hours. And beads... I love beads. But the nail in the coffin was Celtic Consort saying "that's good. you should pace yourself. Show some control." He might as well have said just do it. Most of you know that saying I shouldn't/can't/won't do something is issuing a challenge to do it. Right then I went, signed up, and starting looking at laceweight options. I knew I wanted something I could find locally but wanted to research online.

The Celtings and I were off this morning to cruise the local crack dealers for options. I decided that since I'd been thinking about Knit One lately, I'd hit there first and pick up on the back side. Fortunately, I didn't have to stop anywhere else. Lots of choices. They had the Helen's Lace in Black Pearl which was tempting. I had decided on the murky man colorway idea for my version. Something dark with a purply hint. They also had Handmaiden Camelspin (70% silk, 30% baby camel) which was REALLY tempting but no dark colors and none of any one to utilize for the project. Some nice Malabrigo laceweight too. But what captured my heart and wouldn't let go? Handmaiden Yarn's Sea Silk in Midnight. Heck even those pics don't give you a full idea. I even found beads that match almost exactly. I got my teeny crochet hook there too. The nice girl who helped (sorry I didn't catch her name) was even cool enough to help handwind a "naughty" skein when it kept snagging as we tried to do the ball winder. So now I'm off to catch up to everyone else. Check in for pics later.