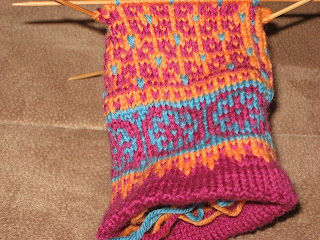 For some odd reason, DPUTiger’s Postwar Mittens have created an obsession in me to make them. But not in the same way as everyone else. Despite the designer’s ingenuity to provide three different motifs to choose from in addition to three different colorways, two different thumbs per motif, and two different styles (pointy or blunt), giving a total of about 36 variations. I wanted something UNIQUE, so I’ve opted with a set of colors that will help chase the grey out of a Steeltown winter. Don’t get me wrong, I thought the colorways in the pattern were very pretty (the green especially). I needed more so I chose three very bright saturated tones of Baby Ull to liven things up: Cyclamen (which I keep calling raspberry), Tangerine, and Lagoon. I’ve decided that they make good trolley knitting despite being colorwork. This is because the pattern is simple and repetitive. It’s also very easy to look at my knitting and see where I am. I managed to work a few rows on the way in to work this morning. They must be nice because the woman who sat down next to me immediately said “That is gorgeous!” I like them and I think if my knitting pace keeps up, I should have a pair or most of a pair for Friday knitting.

Speaking of knitting, we had newbies come on out to see us. Katie and Katy joined us separately and we were glad to have them. They actually even seemed to like us and not be scared away. Always a good sign. Julia visited too and brought the latest installment of Vesper Sock Club. 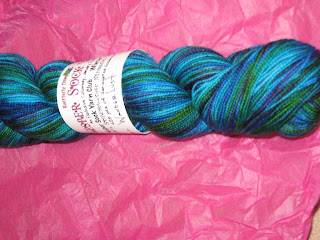 “Wanderlust” isn’t it divine? Both Laurie and I immediately thought of Leyburn. Saturday brought Spunky Club in “Twilight”. YUMMY! I really need to get spinning. I have a ton of fiber to spin up but I’m not practicing enough. Need to get at it. 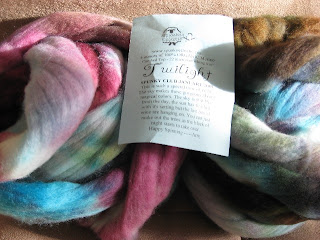 Oh and my first RSC of 2009 came today. "My Blue Heaven" with a pattern from Sivia Harding which includes BEADS!!! I totally have to do them now but they need to get in line. 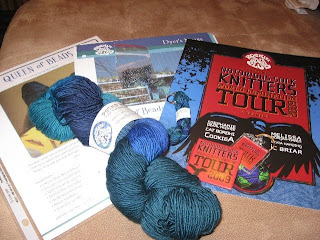 So all these things are driving me to finish London Calling, MS3, and Noro Moebius. Yes I’m still on the black hole of the sewn bind off for the moebius but I’m doing a chunk at a time so I don’t suddenly snap. I’m also on a schedule for MS3 to be sure it’s done on time despite my somewhat magpie like attention span. I also cast on for the first flame hat. Not much progress outside of working on the really nice cast on which Heather showed me. But I have hope and I also have a time frame that I’d like to have them for too. So once again, schedule.

Oh and I’m STILL waiting on the rest of my Fiddlehead yarn. It should be arriving shortly but at least I have Postwar to distract me.
Posted by Celtic Queen at 6:11 PM 3 comments: 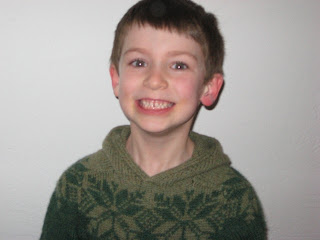 Seven years ago, this trouble bubble came into the world. He has grown a bit since then but is more talkative now. Today is a bit subdued as both he and Elder Celting are grounded for their behavior this past weekend. Saturday we are doing cake and ice cream with the family. However, so that today is not a total bust, I made cupcakes for school and mint chocolate chip cookies for home. TASTY!

Now on to the knitting! In case you missed it, YC is wearing his Snowflake Saddle Hoodie. He wears it as soon as it comes out of the wash. Also any time he think I won't notice that it hasn't been washed yet. EC has been wearing his but I can't seem to get a decent shot where he's smiling. 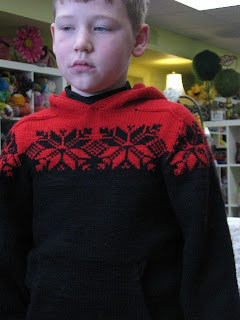 First of all, since my moebius was lost, I started on this one. I just need to finish the sewn cast off and it's ready to wear. 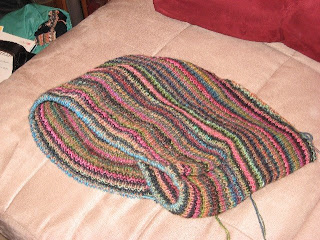 I'm also working on my Figgy Pudding Vesper socks on the trolley. Many admirers on the 47L. I personally can't wait to finish them just to wear them. 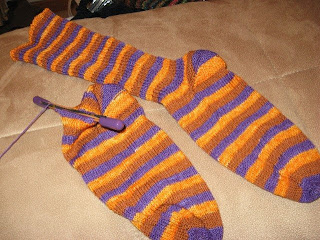 And I've cast on my London Calling. It's going fast so it should only be a little while. 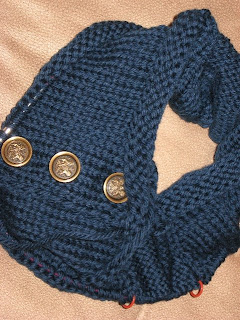 Oh and my last color came for the Flame Hats. So I'm using Falk in black, neon orange, and burnt orange. Perfect BP colors. So once I get more done on MS3, I'm casting on. They may become my next trolley knitting project.

So I'm trying to entertain myself with our new tv to keep on knitting. 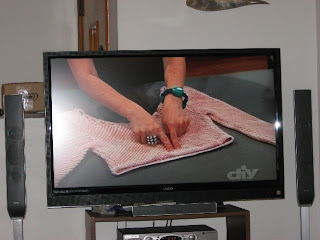 Can't Write, Knitting will Swallow Me

Okay somewhere in my deluded mind, I believed that after Xmas knitting that I would be able to breathe easy. Nope. I realized that I have a TON. OF. KNITTING. I'm still in process with Snowflake Hoodie for Elder Celting (on the hood should finish tonight). I've also got to work on my Noro moebius as I've lost the Fibonacci Moebius. :( In addition to these things, I'm working on my Figgy Pudding socks on the trolley. Plus I need to get cracking to complete the wing on MS3 for Heather. This one has a HARD deadline and it cannot be missed as it's way too important.

Now let's look at what else is going on. Elder Celting picked out this book for me as a present from Bloomin' Yarns and I lurve it! I plan on doing these socks from it. I also want to do flame hats for the 13 players of Elder Celtings soccer team, because I'm nuts like that. Not to mention, my yarn for London Calling is coming. As is the stuff for the Spectrum Tam and Scarf, plus my Fiddlehead Mittens (curse you Julia! :) ) Oh and did I mention I wanted to do my Triinu shawl for MDSW?

(p.s. pictures to come soon of all the yummy knit goodies)
Posted by Celtic Queen at 8:17 PM No comments: