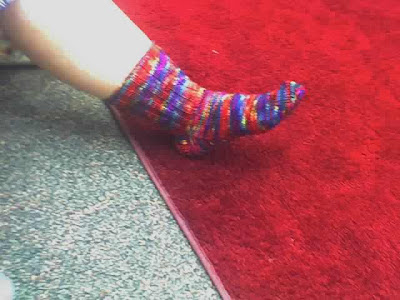 Can I just say there's nothing like someone's first sock? I mean as sock knitters go, you take a leap of faith that the heel will magically appear every time. But having done it before, you're somewhat reassured that yes, it really DOES happen. When it's your first sock EVER, despite reassurances, you're not really sure. You almost feel like it's an initiation ritual that they will reveal is a joke and show you the real way. Then you get to the toe, and while not nearly as intimidating, grafting is a whole new mystery. I mean come on, can you really get single piece of knitting from two without a visible seam? But then you see it happen, MAGIC! 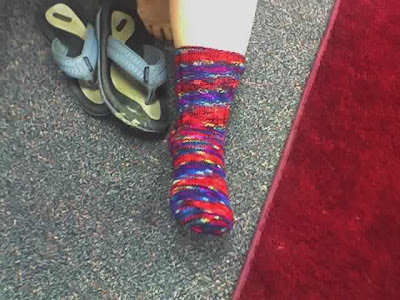 So why the spiel? Well Stephie (forgive any mispelling), completed her very first ever sock on Friday at Knit Knite. She promptly received a round of applause and much congratulations. She even said there was no second sock syndrome as she was anxious to do the second to have a pair. She started with a pattern and then moved on to the sage advice of Heather who help guide her beautifully. I gave some minor advice on her continental style as out of the group I'm the only one. ( I know I'm weird) Beautiful sock and I can't wait to see the pair.

Stacy was also there working on her first sock. She seems to be making some good progress despite a few little pauses on Friday. It was a fortunate thing that we managed to find her again and she joined us at Borders.

And I suggest you all demand photos of Heather's current socks. I got to see the beginning parts and they are BEAUTIFUL. A lovely use of the color rich Shibui Knits Sock yarn.

But CQ, what about YOUR knitting? Well I finished the model for Bloomin Yarns and I'm finishing a matching cap. I also picked up some yummy Tilli Tomas silk yarn to do the River Rock scarf in a color called Glazed Ginger and found teal beads. YUM! I've also got back to MS3 and only have about 25 rows to go on Clue 4.

P.S. Laurie seems to think that I've cursed her with my witchy ways as she's now had to rip all the way back about 3 times. I have no idea what she could be talking about (whistling)
Posted by Celtic Queen at 6:31 PM 2 comments:

So I had two baby sweaters to make. The first was my traditional Babies and Bears which was sweet and I promptly forgot to get a picture of. I'm told the recipient becomes quite active and cheerful when it is tried on. :) 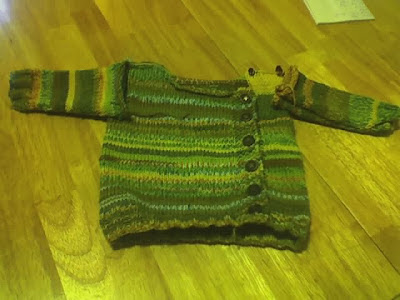 The second is this take on the Peapod. I like the one piece for the body as I'm not a big fan of seaming. I also thought it lent itself well to the yarn. It's Lifestyle yarn from Zitron. I bought it at Bloomin' Yarns and I'm glad I did. Nice hand, knits up fast, and easy care. The colors are a nice take on gender neutral without those washed out mint green and softy soft yellow. I'm thinking I'll have to try some of the other colors too for baby sweaters.
Speaking of Bloomin' Yarns, I'll be stopping by tomorrow to pick up stuff to do a shop model of a baby sweater with some cool sock yarn from Shibui. Heather picked some of this up in some yummy colors which I think will make some beautiful socks. I'm thinking some of these with a golden yellow or orange and teal. Trust me, you'll have to see. 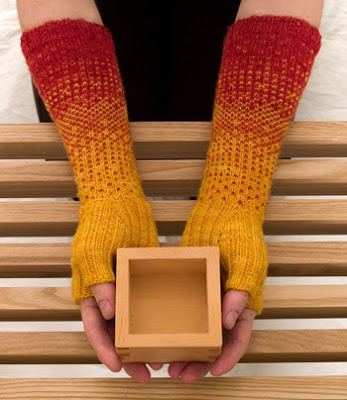 Oh and if you're looking for an MS3 update, well I've taken pity on Heather and Laurie and have slowed down. Although seeing the message about Knit One's fashion show, I'm thinking I need to finish in time. I mean there are PRIZES people!
Posted by Celtic Queen at 8:19 PM 2 comments: