So for Wuletide, DPUTiger was fabulous with her sewing skills and gifted me with a lovely box bag. (mine is the dark purple, second row from top) I think there's something about the fact that there is a big zombie theme here at Celtic Castle. She made it in purple and green because those are the colors listed as favorite in Ravelry and I LOVE it! However, kind of funny that purple and green make me think zombies. Why is this relevant? Well right now, it's acting as a body bag. I have a head, two arms and a partial torso in it right now. That's right I'm carrying around body parts. All soft and squishy.
I should finish Lego man in time for the party Saturday night. I just have been hiding knitting. So lots of trolley knitting.
I'd also like to give DPUTiger credit for enabling this. She might as well have posted a billboard saying CQ sign up here.

I've decided to do it in Silk Thread II from Blue Moon in Blue Moonstone. 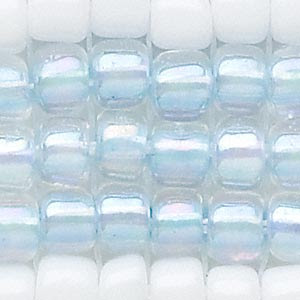 I've also gotten these beads. Yum!
Oh and did I mention I also found my Knitting Olympics project? I'm doing this.
Yarn is winging it's way here right now!
Last but not least, I had a library stash enhancement that will surprise almost no one. I found this book during Celtic Consort's post dinner excursion. I took one look inside and said I had to have it. 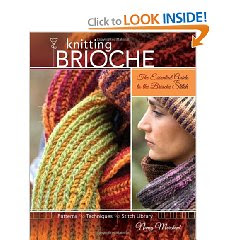 So 8 years ago during an ice storm, I was in the hospital being induced. Later that night and early in the morning, Younger Celting made his reluctant entry into the world. I'm a day early with the post but I had to share the class birthday prep.
The theme this year is Pokemon. I dread this stuff. However, what he wants he gets. So as many things as I mess up as a mom. As many times as I'm not the uber mom, I do some things to shine. (I hope). When he asked for Pokemon cupcakes, I went to it. 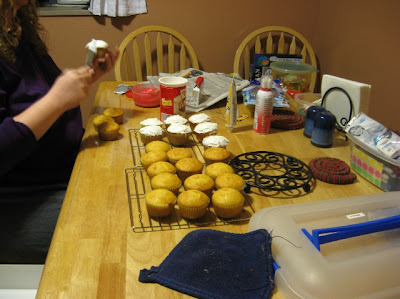 First it's mixing of icing to get some red and some white. I then started here with white half of cupcakes. 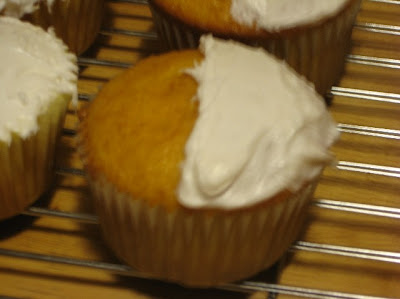 Then a nice twist of red icing to be half and half. 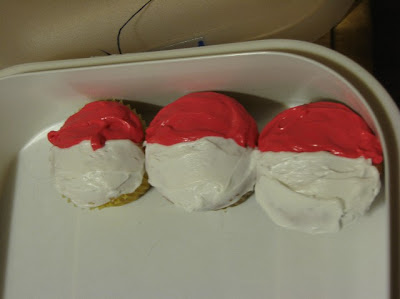 And finally a fine line of black and voila! Pokeball cupcakes! A full two dozen to be exact. 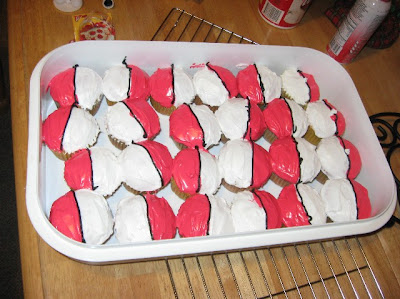 Gosh I must love this kid. :) BTW, thanks to Elder Celting for the early photos.
Posted by Celtic Queen at 7:49 PM 2 comments:

Younger Celting will be 8 later this month. We're doing a dual celebration with YC and Celtic Consort as their birthdays are just 9 days apart. Usually, we do them on different weeks but this year had it's own issues. CC's family is full of January bdays. YC's bday lands on a Wednesday this year and unfortunately, I have to work (from home) this weekend. Not a good idea to plan to have people over.

So I thought okay we'll do the following Saturday to have everyone over for celebratory treats. No go. CC's middle sister has her birthday then. Since she still behaves as though she's a child and her mother indulges this behavior, YC has to wait to celebrate until the 30th. Almost 2 weeks AFTER his own bday. Just so you know, 30th aunt bday trumps 8th nephew bday. So grownup.

ANYHOW, I got side tracked. YC is a HUGE Lego fan. So when I saw this pattern (thanks to my Rav friends), I had to make it. I made a special stop tonight to pick up some red, blue, and yellow to make it. I probably could've raided the stash for something but I knew I didn't have appropriately primary colored yarn. I think that's part of what makes it work for me. The only question is what will Elder Celting think? :)
Posted by Celtic Queen at 8:08 PM 5 comments:

So when we pulled the Christmas tree out this year, I found the top broken. I was able to jam it in enough to make it through the holiday season but the top of the tree was a bit sparse on decoration to not worry. So the tree we've had since Elder Celting was a toddler is about to make it's departure. Apparently, this is the year of the departure.

I decided to shop after the holiday so as not to pay several hundred dollars for a tree we use once a year. And this evening, I stopped out with the Celtings to find the replacement. I was hoping for prelit with multicolor. I was also hoping for LED. No luck on the LED but I DID find the prelit multicolor for 80% off! YAY! Celtic Consort needs to stop out tomorrow to pick it up.

I decided that I would wait until the holiday stuff was put away before trying to take pictures and document the stash. My broken tree blocks most of the light from the front window so it's not very conducive to good pics. So I should have nice pictures later this week. I'm also trying to use some stash for things.

Having said that, I also just signed up for Rockin Sock Club. This will be my fourth year. I've participated in every year except the very first. That was only because I didn't know about it until after signups closed that year. I'm also renewing my Vesper Sock Club. How could I not? Have you seen Julia's stuff???? It's like telling a kid in a candy store that they can't have anything. Yeah RIGHT!

Talk to you later this week and hopefully see some of you for Wuletide!
Posted by Celtic Queen at 8:16 PM 2 comments:

Is this thing on?

Yeah I've been away for months. Things have been crazy with the merge into the parent company, soccer season, and just life in general. I haven't been a good blogger.

However, one of my New Year's resolutions is to blog at least twice a week. So here's to a fresh start.

One of my other resolutions is to get my entire stash into Ravelry complete with pictures. While it may seem intimidating at first, I think once I get rolling, I'll be okay. Then once everything that's already in the house is logged, it's only just keeping up with the new items.

So here's to the New Year and improving one's self. No matter how many bad choices you make, you can always change for the better.

Now I'll leave you with something that makes me very happy. My Vesper Fiber Club December Shipment. 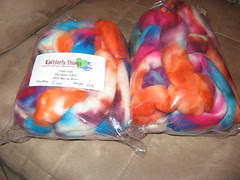