My Knitting Ate My Blog 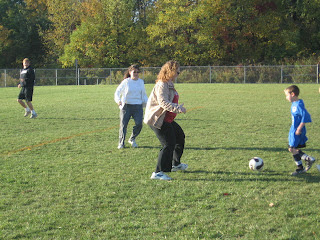 Okay I know I'm a bad blogger. I've just been trying to focus on getting some knitting done and trying to finish out the soccer season. Good news is that on the soccer front, Elder Celting's travel team finally won a game and they all felt great. The soccer shoot is coming this weekend. Part of the fun of soccer is the parents/coaches vs. kids games. Laurie was kind enough to take some shots of the game. 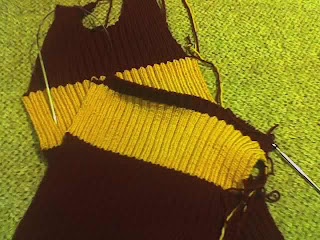 So on the knitting front, I've cast on and made it through the front and halfway up the back for Elder Celting's Quidditch sweater. The Notre Dame sweater is waiting on blocking so I can seam up the shoulders and do the collar. I also need a button.
I've finished the first Coriolis sock and I'm on the leg of the second. I'm hoping to finish that so that I can send them over to my BIL Lou this weekend. I've also got a wrap on the todo list for my mother. It's similar to the ones Heather made. Oh and I've got THREE teacher scarves to make as well. Now do you get the title? 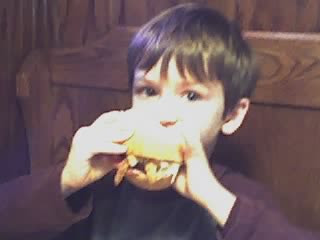 So in other news, we get new furniture on Thursday. YAY! And while we were shopping for it this weekend, we had lunch at Primanti's. Nothing says Pittsburgh quite like seeing your 5 year old eat a sandwich as big as his head. Funny thing about this shot is that the building it was taken in is the same location a picture of myself at a very young age drinking a shake as big as my head was taken. Laurie knows the picture.

Oh and keep your eyes open. As soon as I figure out the best way to do it, I'm posting my pattern for a few projects starting with the Fibonacci Moebius.
Posted by Celtic Queen at 7:22 PM 1 comment: