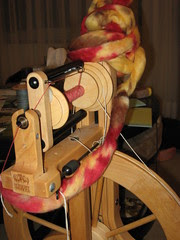 Day 5
Originally uploaded by sjbench@verizon.net
Well I finished the other bobbin and started this. Another Spunky Club in the appropriately named "New Day" colorway. I thought the yellow and red appropriate to my pace. Yellow because I win every day I spin. Red because I feel like I'm always bringing up the end in my less than prolific progress. :)
Posted by Celtic Queen at 9:50 PM 1 comment:

First let me say that yes I did spin for Day 4 of Tour de Fleece. However, no exciting progress as I had bigger fish to fry tonight.

So I was just about to start my second day of my 30 day fitness challenge on Wii Active, when crying and sniffling noises came from the side door. Based on what I was hearing I was expecting a "EC hit me with a ball!" "Did not!" kind of conversation. Instead, I got YC with his face covered in blood and EC quickly trying to reassure me it was not his fault. The basic story was that they were playing on the back hill with the wagon. At some point, the wagon was going fast and started to list to one side. YC trying to recover, leaned the other way and promptly met face with tree.

After cleaning away the bloody mess, I could see that it all came from a nice gash style cut on his browbone. Not sure if it was stitch worthy, we took off to MedExpress. Turns out, no stitches, just surgical super glue and a steri strip. First true medical patch job on either of the Celtings. We've had breathing things, nursemaid's elbow, and the weedkiller scare, but nothing requiring some outside item to hold the body together. 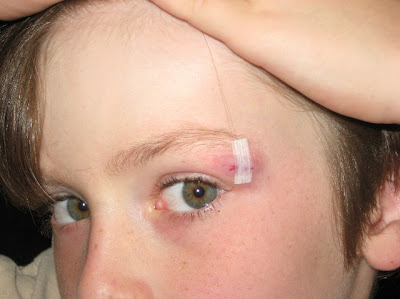 Side note: I was pleasantly surprised how well this shot actually captured YC's eye color.

After coming home, I did get back and finish my second day's workout and I'm feeling it. But in a good way.

I then checked my email to see resolution in yesterday's Redbox debacle. Instead I got a reply telling me that emails get caught in spam filters and that it was too bad, so sad for me. I IMMEDIATELY called Redbox back where poor Shane answered my call. Shane was much more helpful than his coworkers. It only took me to almost screaming that I had bank records and that the machine I rented from wasn't even at it's location on the alleged rental date. He placed me on hold (probably to tell a supervisor that there was a raving madwoman on the phone). When Shane came back, he identified that the machine was the problem and they would be refunding my money FINALLY. I also received free rental codes for 3 movies. Apparently, my suggestion of the machine not being at the location prompted him to look into it's history. What he found were items being returned BEFORE they were rented, items which were rented before the machine was in service, and various other whacked out scenarios. If the woman I spoke with yesterday had not been so condescending, perhaps I wouldn't have almost jumped through the phone at poor Shane. I'm just glad that I check my receipts. 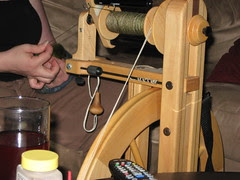 Day Three
Originally uploaded by sjbench@verizon.net
Thanks to Elder Celting who did my entire photo shoot. I thought this one showed the fiber best. I'm surprised I could still spin after working all day and completing my first workout for my Wii Active 30 day challenge. We'll see how I am tomorrow.

BTW, fighting with Redbox right now. Usually I love them, but I was just charged for 17 extra days EACH for two videos I rented on July 3rd and returned on July 4. When reviewing my rental receipt again for the initial night, I found that the invoice was dated for JUNE 16TH. I had to forward the email and I included that I could provide bank records as well for the initial night charge. Almost $37 bucks in bogus charges because someone somewhere didn't set something right.
Posted by Celtic Queen at 10:18 PM No comments: 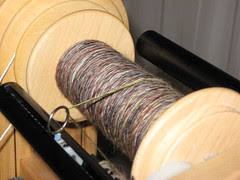 Day 2
Originally uploaded by sjbench@verizon.net
Well, I made more progress today. But I think it will be next weekend that will make a dent for the stash. I just hope that I don't spin so much I injure myself. :)
Posted by Celtic Queen at 10:41 PM 1 comment: 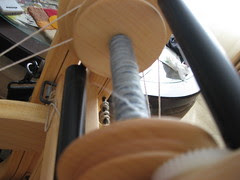 Soul Windows Single
Originally uploaded by sjbench@verizon.net
Here's what I was doing while Lance was running his time trial
Posted by Celtic Queen at 11:12 PM 1 comment: