Let Us Give Thanks...

As a knitter, I can appreciate when someone takes the time to make something for you. It occurred to me as I was prepping for tomorrow's feast that I have been extremely fortunate. I have been blessed with a family that while weird, quirky, and sometimes downright annoying, have the knack for pulling together to help in times of need. Regardless of what the problem is, there is always someone with the ability to extend a helping hand. Good example is when I was pregnant with Elder Celting, Laurie took me in and helped with childcare so I could get back to school and support us. Granted she locked me in the attic but I digress. :)

Back to the time it takes. The penultimate giving family member though was my Grandmother. As I popped my pies into the oven, I thought of how my childhood holidays were defined by her baking. Days before she would start baking pies, cookies, and rolls. She took the time to make pie crusts from scratch. She took the time not only to make all these things but teach us how to make them too. Thanksgiving brought pies in all varieties; 4 pumpkin, an apple, an apricot, and maybe another. The trimmings of crusts were made into little cinnamon rolls given to her helpers. Rolls were made that were perfect trefoil rolls, crusty outside and warm and tender inside.

Not to mention the Thanksgiving feast itself. There was always a big turkey but then the sides! Oh how they can make or break a dinner for me. Mounds of mashed potatoes made with butter and milk. Candied yams whose glaze was better than gravy on the turkey. Green beans almandine and peas with pearl onions. Always that childhood favorite of big black olives to put on a thumb. Celery stuffed with cream cheese and peanut butter. Waldorf salad crisp with apples and crunchy walnuts. Jellied cranberry sauce was the least homemade still holding that form of the can.

To set off all these treats, they were served on the china and fancy serving dishes that spent most of the year glimmering in the cabinet in the dining room. We brought out the box with the silverware that was polished the week before. A nice tablecloth was on the table. Somehow the house was always warm and smelled of good things. Even after the feast, yummy leftovers hid in the fridge waiting to be devoured.

Looking back, I see now that she did all of this because that's just what you do. The same as I would give handknit socks. You can't skimp on the dinner, it's just not done! And she shared with me the desire to give of these memories to my kids. Even now, Elder Celting is sneaking a bite of the Waldorf salad I know he thinks Thanksgiving cannot be without. Younger Celting watched anxiously to see the pumpkin pies finishing. I may take a few more shortcuts than she did, but the spirit is the same. For me, I'd be cheating if I bought my pies instead of making them. I'd be denying my roots to not serve green bean almandine.

So thanks, Grandma, you gave of yourself and for that I'm grateful. I can now see how that time was precious.
Posted by Celtic Queen at 9:19 PM 2 comments:

Okay I know I've been away for a WHILE. I'm busily working up a storm here. Good news is that soccer season is over. Bad news, holiday knit season is on. I think it's going to be a little bit of a challenge but I can do it.
I have FOUR teacher gifts to knit up. I've opted for 3 scarves and 1 pair of Fetching. Here's a pic of the first scarf, the Noro Stripe done with Patons SWS. I'm going to do a second with a different color set. The other scarf with be the brioche scarf from Weekend Knitting. 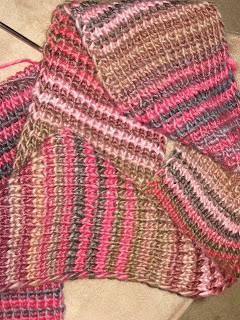 Then we have a pair of socks for my mom. Excuse the colors as I'm not a fan but she is. The brighter the better for her. I'm working on them on the trolley. 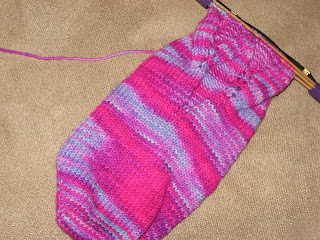 While we're doing those, I'm also finishing up a Babies & Bears for a coworker. I'm hoping to finish tonight or tomorrow.
And of course, the Celtings' Snowflake Sweaters. Mostly done but still work to do. 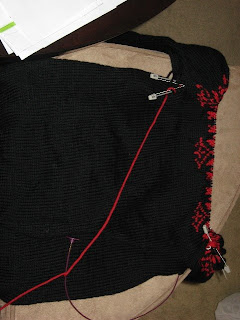