I'm not one to continually post of those in military service. Sometimes I even find it irritating though I do appreciate what they do. However, I've found that people have forgotten what Memorial Day is about. It is a time to remember those veterans who have passed away. Those who have lost their lives fighting for our freedoms and those who survived that fight and were fortunate enough to enjoy those freedoms afterwards.

This Memorial Day marks a landmark for me. It is the first that I remember my favorite war veteran, my grandfather. A man whose joy for life and all encompassing love enlightened many a life. Unfortunately, he passed last August just before his 88th birthday. He was a man who I hope I have raised my boys to be half as good as. Who cared deeply for those around him.

He would tell stories of his service but at the same time saw no reason for the current war. A man who thought being American meant that it was quite normal to disagree with your President, vote not for a party but a person, and tell any elected official where to shove it when they voted for a lobby and not their voters. He showed me what it was to be a patriot. He showed my boys what it is to be a patriot. To impress upon them that service to your country was honorable and yet to not chase after it. That service can be necessary and yet glory at the price of humanity a terrible thing.

His stories told of the humorous side of war when discussing how he met General Patton at the end of WWII and was fined. They also told of the horror of the concentration camps when he helped to liberate Dakau and was met by a Polish survivor covered in body lice and looking like a skeleton.

Here is to his memory on this Memorial Day. May all of those whose loved ones are currently fighting come home safely so we may celebrate them at Veteran's Day. For those who don't may we remember the great service they have done for all of us.
Posted by Celtic Queen at 9:47 PM No comments:

I can't believe I bought the whole thing....

As you know Laurie and I went to MDSW the first weekend in May along with tons of other people. I ended up being close on finishing Que Sera but decided to get the extra sleep instead of finishing since the weather was predicted (correctly) as being in the 90's.

I had a ton of fun but didn't really take any pictures. I think I was too hot. I ended up making a tshirt to wear with my Ravatar and some cards with my contact info. If you've found me that way, welcome to the party!

Due to the rumors of Rare Gems, Laurie and I decided to stand in line at The Fold this year. I haven't done this for several years as I already had a bunch of STR and I could get it online. But a Rare Gem is something you CAN'T get that way. Both Laurie and I found some that appealed. I even found one for DPUTiger!

So what all did I get? Well here's a pic: 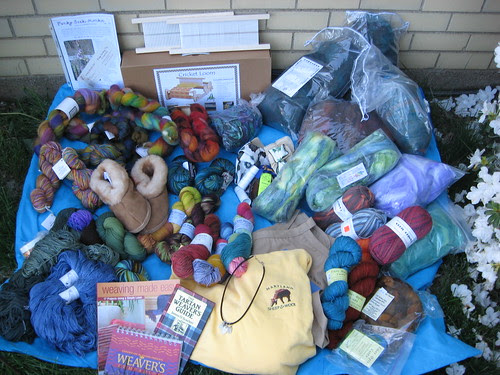 So let’s see if I can document it all starting top left:
Gale’s Art Fibers - 2 Blue Faced Swirl in Moldy Pumpkin, 1 Polwarth in Mudpie, 2 Alpaca Silk in Scarab, and sock yarn in Scarab, Moldy Pumpkin, and Crayon Box.
Funky Monkey Pattern from The Fold specially requested by my 8 yr old
Cricket Loom and some extra heddles from Susan’s Fiber Shop (Hi Newt!)
Spirit Trail Fiber - Merino, Angora, Cashmere in Indian Corn
Almaza from Just our Yarn is the blue in front of the the fiber for Dragon Wing Shawl
Rayon Scarf weaving set from the Mannings in Jewel Tones next to the fiber
8 oz Galaxy, 1 Spontaneous Spinning batt in coppery/russet tones, and Striping Batt in Beach Bonfire from Loop
8oz of Merino/silk/bamboo blend from Bullen Wullens (great deal on Sunday)
2 bags of basic fiber and 3 superwash/bamboo sock yarns from Little Barn. Love using this fiber to try new techniques. No guilt!
To the left of that is project bag I got at Spirit Trail, some blueberry honey and Scottish Heather Hand Cream from Bee Folks.
Fiber Optic Siren Song in Peacock, FootNotes in Russet, Lace in VitaminC (a little buried) for Cascata, and fiber in Acorn. With a sample of Siren Song Unspun I got waiting in line at the Fold
MDSW hoodie and earlier year apron for spinning
Stitch Marker necklace from Jennie the Potter
STR in Cattywampus, Illanqu, with 2 lightweight rare gems, 1 mediumweight rare gem
Pair of yummy slippers from Sheperd’s Flock(?)
Tess Yarns: Raw Silk in a piney color for Summit, Cascade Silk in blue and green for Corset Top, 2 sock yarns for baby sweaters, and a mug.
TIG Glenhaven in Father Time from Cloverhill just above the weaving books.
I also got 2 bobbins for my Schacht Woolee Winder and lots of fun buttons including “If knitting were exercise, you could bounce a quarter off my @$$”
Not pictured is a Cottage Creations pattern for Kylie's Kardigan.
Next up I'll show you my Que Sera and the one that got away.
Posted by Celtic Queen at 8:10 PM 1 comment: