A More Even Keel

So things at work are still hectic but have balanced out. I had my review on Friday and found out that despite the company's miserable standings, I received a raise and a "promotion". Now I know some of you are wondering why it's "promotion" and not just promotion. It's because I finally got the title that reflects the job I really do (Sr. Lead Application Developer) as opposed to the same title as just about everyone else in our IT group (IT Analyst) including the low man on the totem pole who's lucky if she can accomplish a task without messing up at least one step. So I guess this means an upward trend. 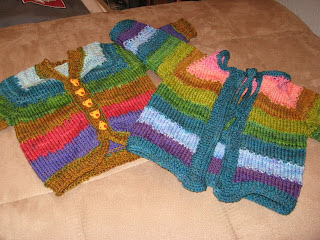 Now on to the knitting. I left off with a mostly finished Rocketry. Well I now have a finished Rocketry and Tulip. I've also worked with the leftovers from my kit to forge into a Tulip for my niece. I'm filling in where I need to. 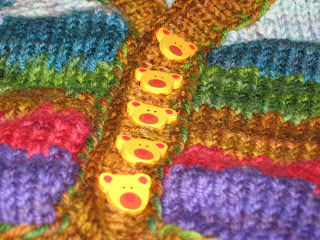 Look at the adorable buttons I found for Rocketry too. I love these buttons and have used them in the past. I love them so much, I'm willing to forgo knitting them in because the shank is the wrong direction and sew them on (GASP!!) 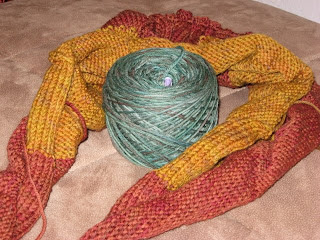 And Saturday was a wonderful day. We had soccer practice down at the Iceoplex. Unbeknownst to me, the Pens were also practicing there. They stopped over to say hi to Elder Celtings team after both practices finished. We even got to see Sid the Kid on his way out of the building. Before you ask, I had forgotten the camera at home. I could've screamed. So from that high, I ran over to Bloomin' Yarns which was right along the way. I had a falling down with yarn for my own Tulip. As you can see, I'm cranking along. I'm going to have to hold up though once I finish with that green (Goodluck Jade). The next color I'm using (November Muse) is on order and I have to wait for it to come in. 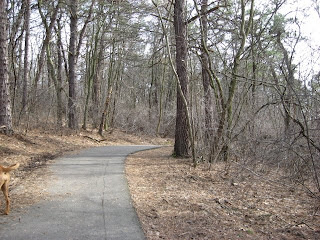 Saturday was so nice, we even took Ginger the Were-Beast out for a walk in South Park. For those of you not from the 'Burgh, South Park is famous for one thing... buffalos. They have a few and our walk is a meandering path that is great for the glutes and wears out the dog. See? But the coolest thing is that from along this path, you get a good view of the 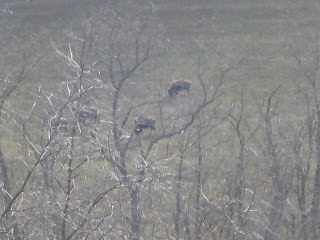 buffalo enclosure. I finally remembered the camera so I could show you our furry friends. I often wonder what they do with the fibers they collect from these guys. As a matter of fact, the Celtings and I have had discussions about the properties of various fibers and spinning prompted by buffalo sitings. :) It's nice to know that while I often think I'm a crappy parent, I must be doing something right. After all my kids are pretty well rounded from sports to spinning to Legos and video games.
Posted by Celtic Queen at 8:36 PM 2 comments:

Nice and Not So Nice

Friday started out crappy. I had it out with my boss because I finally told him what everyone was thinking and saying just not to him. He wants to run the project I'm on but can't read any of the documentation to discover what ground he doesn't need to recover and what is still outstanding. When I try to help, I'm told "you don't need to be included in everything." Okay but don't say that I wasn't willing to be a team. I even left for lunch and was denied my favorite shortbread cookies at Panera. So thinking I need to hit the Powerball and tell everyone in my professional life off, I headed to Knit Knite to play with yarn. 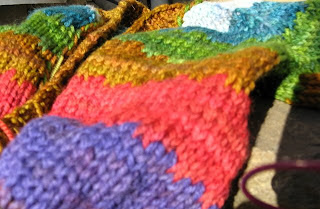 That always makes me feel better. I worked on Rocketry 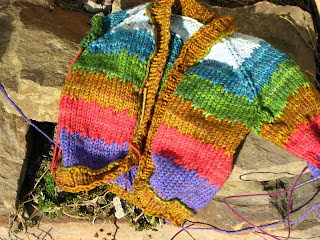 which was even more cheerful. I had yummy coffee (Honey Cinammon Latte) and a Snickerdoodle.

The best part though was this: 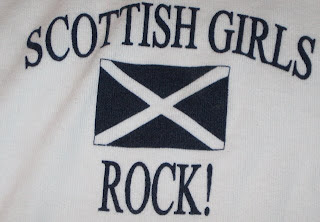 Heather found it for me on her trip to Ligonier. She said she had seen it, thought of me, and couldn't walk away. How's that for unexpected joy? I can't wait until it's warm enough to wear. 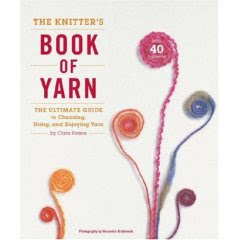 was able to not only get this: 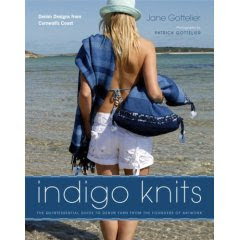 but also this:
I found it while I was looking on the knitting shelves and was intrigued. I'm not normally a cotton knit kind of girl but I loved these classic styles that I could actually picture wearing and/or using. I really liked the throw and the surf hoodie. 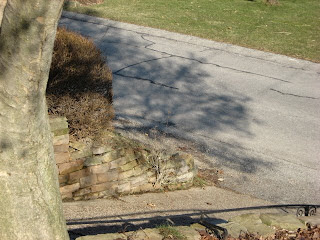 I snapped the Rocketry shots while there was some sun still outside. I also wanted to show you my parking issue today. See this spot in the shade of the tree? It's my off street parking area at the bottom of my drive. Notice how the drive levels to the street and you can pull the car into the spot on the left and still be somewhat across the drive if you wanted. We park the Cavalier there since it has all the fancy ground effects on it, preventing us from putting it in the drive. 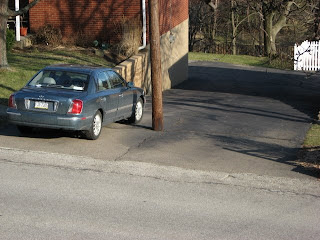 See this car? It belongs to Mr. Furline across the street. He parks at the absolute end of his drive and then proceeds to use the neighbor's drive to get in and out of his own. He also complains if she doesn't have her side cleared when he expects it. That just drives her nuts. I know what's this got to do with anything? Well this morning as I'm pulling out, I notice that his car is parked in our parking area. You know it's one thing to be neighborly and ask to use the spot because something's going on with his own driveway, it's another to just park there. I mean come on, in the past six and a half years we've lived here, the man has made it perfectly clear that all parking areas are at HIS discression. We've had people over for a party who parked on the street in front of his house because there was no more room anywhere else. He told them they needed to move because they weren't visiting his house and couldn't park there. Taking Laurie's advice, I went to ask what was going on when I returned this evening and the car was still there.

This was the point where the man said he parked there because we make it difficult (meaning he had to do a 5 point rather than a 3 point turn) for him to pull out of his driveway if we park across the front of ours. He paused to show me where we parked the car. It was a spot fully on the street. I know my husband. While he parks at the end of the drive, it's fully ON the drive not in the street. He referred to his relationship with the previous owner of our home as if that made a difference. Trying to be respectful of a neighbor and an older man, I let him know that I would mention it to my husband but that we didn't park on the street. I reminded him that the scenario of us parking across the end of our driveway was the same as him parking at the very end of his. At that point, I told him that if he persisted on parking on my property, I would have him towed. Oh and I let him know he had best move the car before I had to let the dog out. After all she had been couped up all day and needed to pee. :) 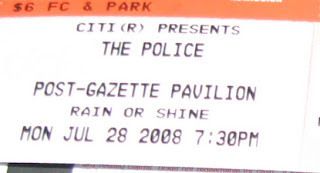 Ever hear that Police song? It's been applied to me many times for various reasons. It's even Celtic Consort and my song. We were out at the bar, I played it on the jukebox, we discovered we both loved that song, and the Police, and just Sting solo. Imagine my excitement when these came in the mail. Woohoo! I think I'm taking the next day off considering I'm likely to be hoarse. Now I just need to get Sting cornered to pose with a sock in progress. 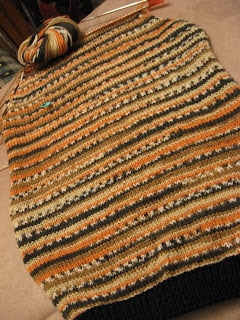 Speaking of socks, I've been working on my Lenores (note the no pic, guess what that means) and Elder Celting's Faux Fairisle after the release of Rogue. As you can see, I've finished the front of the Faux Fairisle and I'm ready to work on the boring black back and sleeves. And just when I thought I'd get on with it. The baby who is the intended recipient of my Rocketry kit, fortuitously came forth into the world. On the down side, I haven't even cast on so I'm already behind. Whoops! 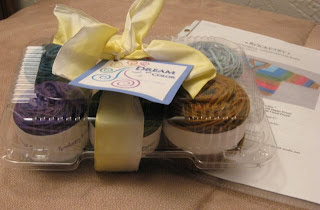 Guess the boring black will have to wait a little.

I also got this lovely package from Julia today. Check out the cute button on my yarn. 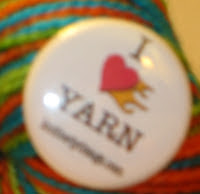 Sorry it's blurry but the camera either 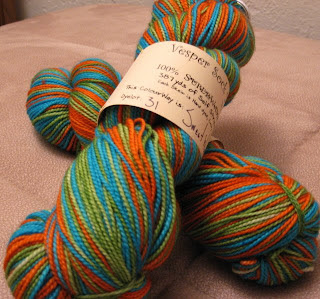 wouldn't focus or would wash it out. Two beautiful skeins to start working on both socks and a hat with a design idea in mind. I can't wait to.... well see above. ;) Okay just kicked over to check I had the link right and she had MORE beautiful sock yarns in new colorways. I'm yearning for Antigone and Pavement but must show control as this order was my second in two weeks. See more things to distract from the boring black. uhum 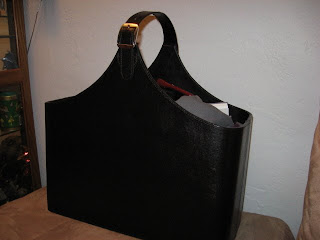 Oh and look new storage for the living room. I got that new furniture a few months back and I've been struggling with where to keep the knitting. You can ask Laurie, not very many options in my small abode. This lovely article was found on clearance at Target for just under $20 and matches the dark wood of the furniture to a T. It also holds a ton of crap. So much crap that we've regained a whole seat on the couch. :) I think it is supposed to be a magazine rack but it's perfect to fit between the end of the couch and the dog bed where Ginger rarely lays. She's usually sucking up a couch seat because CC has a soft spot for her. "She needs to be warm..." Yeah that heating vent right at her bed is making her cold.